The vine that would soon prove quite the troublemaker sure looks pretty. (Credit: Melanie Haynes)

The Not So Innocent Vine

It was beautiful. It was sweet-smelling. It was deadly.

For quite some time, I had ignored lovely, white-flowered vine that had begun to entwine its way around my backyard fence. Gardening has never been a hobby of mine. In contrast to my mother —- who has been known to happily steward anything from ferns to palm trees, bringing them tenderly back from the brink of death and into lush contentment —- my thumbs have always been decidedly mahogany.

In spite of this, I have reached a particular stage of my life in which I am solely responsible for an entire yard. My various jobs leave me little time for much more than keeping the grass below knee-height (usually), and that mainly to prevent any possible HOA complaints from my longsuffering neighbors.

So, when I noticed the vines growing this past spring, I was delighted. How pretty! I have always been a fan of the trailing-ivy aesthetic. Call it my inner “cottagecore,” but daisies, wildflowers, and trees will always be preferable to me over fussy orchids and other such highmaintenance blooms.

Smiling at the clean contrast between the small white flowers and the Fibonacci-esque greenery, I decided to let it grow. The season crept by.

Notoriously unobservant when it comes to physical surroundings, I wandered off and did my own thing and let the vine do likewise. It was summer, and the air-conditioner beckoned. Tasks were checked off. Memories were made. Time passed.

Then one morning last week, on my way back from walking my son to the bus stop, I looked up and finally noticed.

That pretty little vine I had left to twine sweetly and demurely around my fence had not only done so, but it had hurtled up the side of my house, strangled one of the nearby flower bushes, and mushroomed out to nearly seven feet tall, and at least twice as wide! It encased my gutter spout, all the way up to the roof. And didn’t I used to have a decorative solar light in the yard? I was pretty sure I also used to have a rock path, somewhere.

Then I saw the thing that made me angry. That Little-Shop-of-Horrors monster was starting to consume Anastasia. 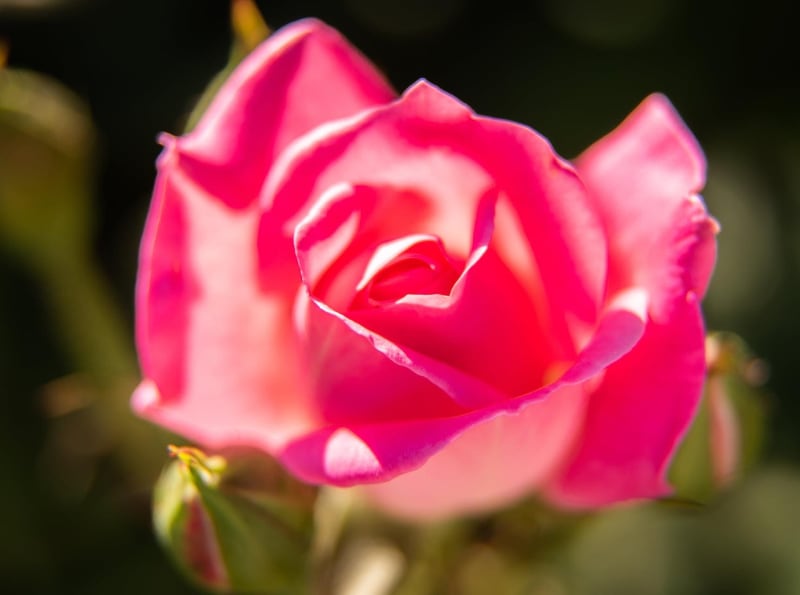 Meet Anastasia, the rose that just didn’t want to give up. (Credit: Melanie Haynes)

At the beginning of the previous spring, I had decided to accept my brown-thumbery and beat my own tendencies to the punch. A former owner of my house had planted a lovely pink rosebush in the backyard, and —- knowing that it was destined to wither and die, like every other green and innocent thing that had ever come under my care —- I had faced off against the thorny branches with a large pair of garden shears and set to put it out of its future misery. After all, I couldn’t take care of a rosebush. Weren’t they finicky? Besides, my kids were scared of the bees that always hovered drunkenly around it.

But somehow, that rosebush had not only survived the clumsy hacking I had given it, but it had seemed to thumb its nose at me, producing a fresh bonanza of light pink roses. I had sighed in defeat, secretly glad that I had finally met my horticultural match, and named the rosebush Anastasia for the stubborn resurrective trick it had played on me.

And now the weedy vine that I had carelessly allowed to survive, at the beginning of summer, was trying to kill her.

I’m not sure what the neighbors must have thought when I went into full Tasmanian Devil mode on that enormous predatory vine. Donning my previously unused gardening gloves, I went out into the chilly rain with steam coming out of my ears. With the same shears I had once taken to Anastasia, I now tried to cut down the results of my summer laxity. 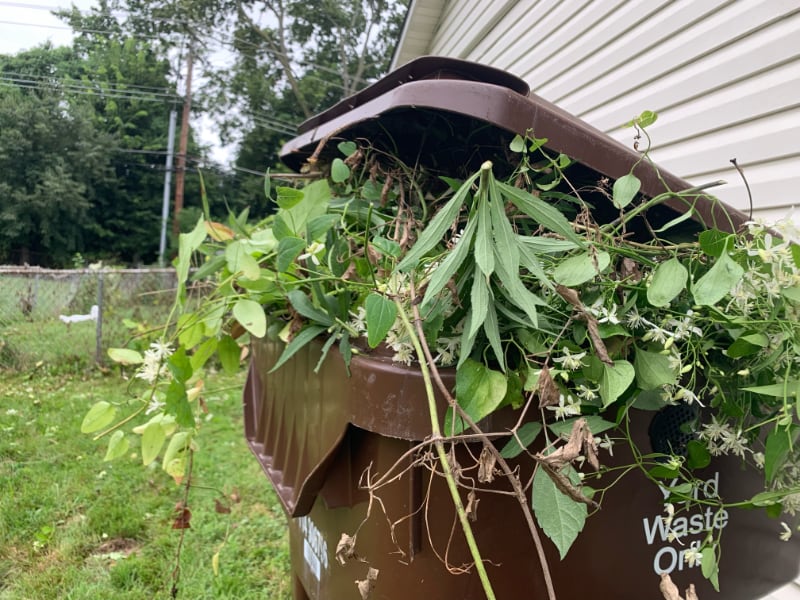 I lost track of how many trips I made. The large yard-waste bin, thoughtfully provided by the city, for a thoughtfully mandatory fee, was so full of the cut-up vine that the lid would no longer close. I squished it down and kept going, squinting through pointillized patterns of raindrops on my glasses.

It wasn’t pretty underneath. The outermost layer of the vine, full of happy leaves and honeysmelling blooms, concealed a thick sludge of slimy, decaying plant matter. The flower bush that it had preyed upon was now brown and sickly. The decorative solar light and rock path were indeed still extant, but dirty. I even found one of the outdoor pillows that belonged to our patio set, somehow several feet away, and extremely sad-looking (can vines eat pillows?).

It had all started out so innocently! A little slumber, a little folding of the hands to rest in the air conditioning … 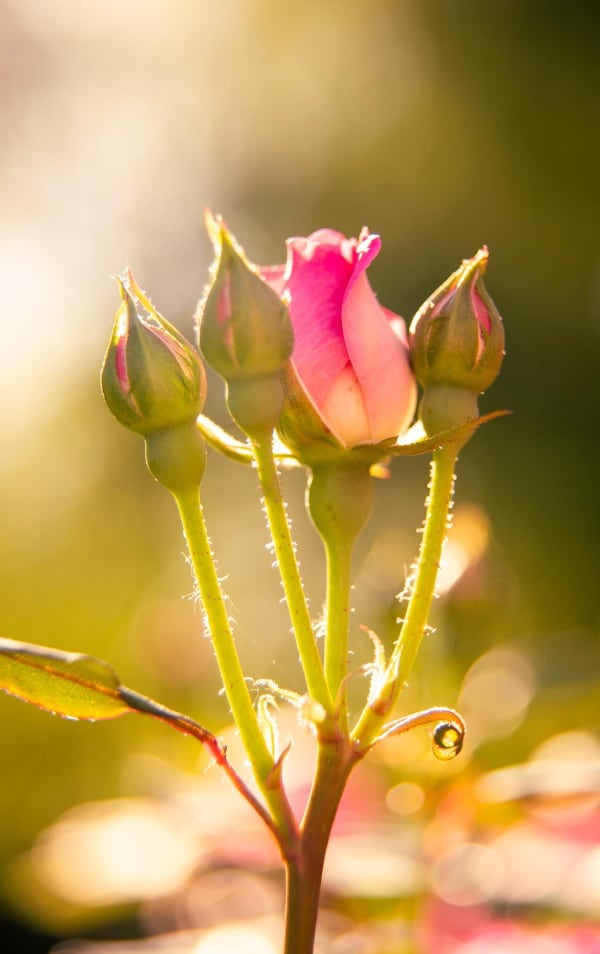 Anastasia shares beautiful blossoms with all who pass by her. (Credit: Melanie Haynes)

A metaphor lover by nature, I couldn’t help but notice a comparison with sin while I was doing this botanical penance. Boundaries are hard to set in our lives. As C.S. Lewis wrote about the most insidious path to destruction, “the … road to Hell is the gradual one —- the gentle slope, soft underfoot, without sudden turnings, without milestones, without signposts.”

As serious followers of Christ, we must be extremely careful about what we allow into our lives. What seemingly harmless sprigs of sin are we ignoring? Left unchecked, sin will inevitably choke us, leaving us spiritually dry, weak, and decayed. Even innocent distractions have the potential to overrun us, blocking our spiritual eyes when we should be looking to the Light.

“… let us also lay aside every weight, and sin which clings so closely, and let us run with endurance the race that is set before us.” —Hebrews 12:1

I am a clumsy gardener. I know for a fact that I was not able to root out the source of that deadly vine, and that it will surely be back as soon as I ignore it again. No matter how hard I tried, all I could do was cut down the branches.

But the Master Gardener has no such limitations. He is able to search the innermost depth of our hearts, help us deal with our root of selfishness, and grow us into people who better reflect His glory, if we ask and seek Him first. 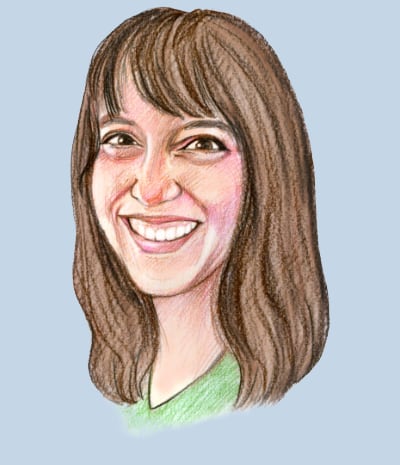 Melanie Haynes is a contributor to Open for Business. She serves as Worship Leader of Little Hills Church, FaithTree Christian Fellowship and True Life Community Church.