Here's where what's left of my paper and the daily paper are published, far from the uptown office my paper used to occupy.

My Local Newspaper Slips into a Coma

It is sad to see a newspaper die. It is sadder still when that death is a particularly gruesome suicide.

For just under 15 years I was associated with a small paper in my small town. I wrote a weekly column — this column — for all of that time; for four rewarding years I was also the paper’s photographer.

The scrappy, happy little paper came out twice a week. It had begun as an alternative newspaper, started by a likable and energetic local character. It published articles on topics such as the best places locally to go skinny dipping (which drew the ire of skinny dippers whose favored hideaways had been revealed), the availability and quality of various mind-altering substances, the rise and fall of local bands — the things that hippie newspapers of the 1970s and 1980s wrote about. It was famous for its parties; at one, a local prosecutor was feeling his oats and fired a pistol into the ceiling.

As time unfolded, the publication became less alternative and more mainstream. Catering largely to students and to post-grads who weren’t ready to give up the university society and who therefore settled in town, the paper was a perfect advertising medium for owners of rental housing (which came to include the paper’s two owners), for bars and restaurants, and other local businesses. In 2009 (if memory serves; I don’t have a copy of it), Editor & Publisher magazine listed the little paper as being one of only three newspapers of any size in the entire country that were actually growing. The paper’s coverage of non-university local news continued to expand.

The now twice-a-weekly paper engaged in lively competition with the small local daily newspaper, which was founded before the Civil War and which concentrated on off-campus news. The daily had gotten sold and resold, passed around like the celebrity-for-no-reason daughter of some Hollywood mogul. It ended up in the hands of a company that had made a business of buying up small newspapers. The scion of the company’s owner would appear before the staff of each new purchase, talking about the company’s “investment in the space” and mentioning repeatedly that he goes to the gym frequently. Some bought the spiel. Many didn’t. It was a good test of whether a person was skeptical enough to be in the newspaper business at all.

Athens News founder Bruce Mitchell wept when, on Sept 24, 2014, he announced to the staff that the paper had been sold. (Credit: Dennis E. Powell)

Then, in September 2014, my little weekly paper got sold to the same outfit. I’d been writing my column there for eight years and had been making the paper’s pictures for a little more than a month. Everyone was nervous, and rightly so.

The founder-publisher buttonholed me in the parking lot the day of the announcement. “You’ve been through this kind of change before,” he said, accurately. “Could you help reassure everybody that it will be okay?”

“No, I can’t,” I replied. “Because it never works out well.” I wish I had been wrong that day, but I wasn’t. The descent began soon thereafter.

Before the sale took place, the founder-publisher had recently hired a new and skilled replacement publisher. Things had roared ahead and continued to do so even after the sale. Then the publisher got a dream job offer far away and announced she would soon be leaving. The new owners fired her on the spot, stood over her as she packed her possessions, and escorted her from the building. I imagine that if it were in their power they would have had her shot.

She was replaced by an advertising seller from the daily paper who, I am reliably told, was given the choice of moving to be publisher of the my paper or getting fired. This new “publisher” was nice enough, but she would harangue the advertising staff in hours-long meetings that seemed focused not so much on selling ads in the newspaper but in promoting “events.” Ad sales dropped. Entire advertising staffs resigned, more than once. Before long, the ad sales staff didn’t even leave the office, choosing instead to sit at their desks and wait for the phone to ring. The paper was soon in financial trouble.

At the time of the sale the newspaper had an editor, two full-time reporters, a couple (sometimes more) student part-timers, and me. I made pictures, wrote my column, and contributed a story or two a week. Each person had a lot of work, but it was not overwhelming and we were dedicated to doing our best, which was usually very good indeed. Then, as people left, they were no longer replaced. At the end of July 2018 I got a call from my editor. He said he’d been told the paper couldn’t afford me anymore — I didn’t charge much, by the way — though it would continue to publish my column if I wanted, at the same rate I’d been paid since I started it 12 years earlier. Other freelancers and part-timers were cut loose as well. 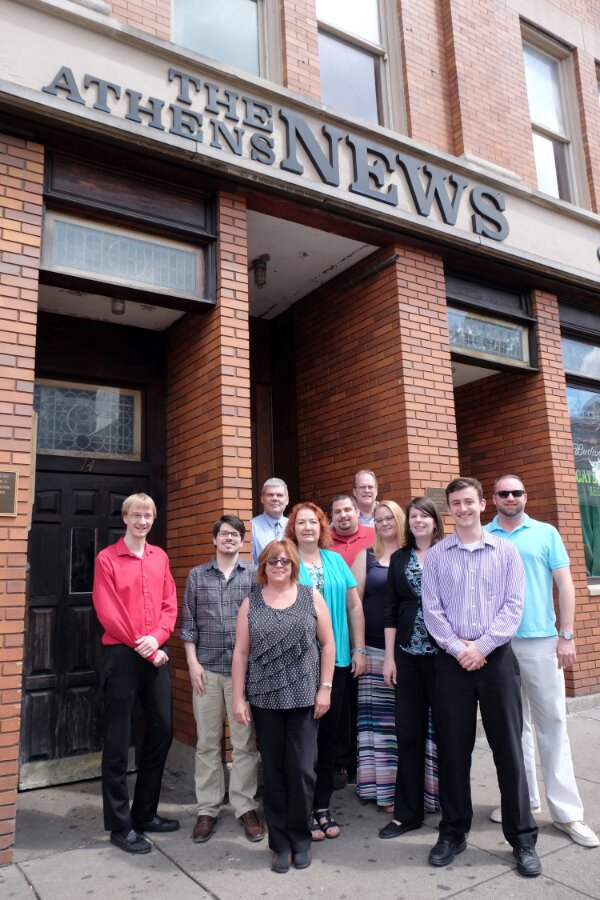 Here’s the paper’s staff in May 2016. None of them is still with the paper. The sign is gone, too. (Credit: Dennis E. Powell)

The paper’s office was prominently located on the town’s main street; indeed, on Sundays and Mondays one would often have to step over a doorway puddle of vomit, left behind by an overly enthusiastic student out partying the night before, to enter the newspaper office. The new masters now moved the offices to their nondescript building far from the action. Local officials and other interesting and colorful persons wouldn’t stop in anymore — not that there was now much of anyone to see. The remaining reporter left and, with the arrival of COVID-19, so did the editor. They were replaced by what turned out to be more or less temporary employees.

The replacement editor was in turn replaced by someone known to me primarily as a writer for a nonprofit organization’s newsletter. We did not hit it off: her first action was to lop the top half off my column, which I discovered only after it was printed. In keeping with the half-off trend, she informed me that my payment would be reduced by half and I would need to sign a new and onerous contract. I declined and was fired. A few months later she tweeted about the paper, accusing it of publishing fraudulent advertising. You’ll be unsurprised to learn that she was promptly fired. The lone reporter soon quit.

That brings us up to the beginning of last month. Since then the paper has been largely filled with unsigned articles, pieces from small regional news outfits, pieces written by employees of other nearby papers owned by the same company, and news releases. The paper’s website, in steady decline for a couple of years, is now a total mess, with the same stories repeated over and over, and “photo galleries” of current local events, which used to have high turnover, now months (and in one case, nearly two years) old.

Today, things actually got worse. Apparently seeking to reassure the paper’s readers, the “President and Publisher” of the company’s papers in Ohio wrote: “[W]e are not just a newspaper, but a multimedia company able to communicate with our audience on a number of social media platforms. We are an event company, a magazine company and we can help with direct mail.” (What? Not a cold-call telephone marketing company specializing in extended automobile warranties?) He announced a new editor, who also wrote a piece. “After years in retail, I knew there was still a void in my life that only the profession of journalism could fill. . . For the past several years, I slowly was able to rejoin the ranks of professional journalists and have now, excitedly, come full circle with this editor’s position. . . My volunteer work includes a two-decade relationship with the Miss Florida Scholarship Program, a preliminary to the Miss America Competition. . . .” He goes on and on, largely about sports for some reason and particularly about some hockey player he knows or admires or something. It would have been encouraging had he said that he hopes to learn to write and edit real soon now but no, there was none of that, and given the quality of the writing in today’s edition, it’s not a priority. (The daily, which I think is now a three-papers-a-weekly, is edited and staffed by the same people and is no better. It’s worse, actually, when you take into account that you have to pay for it.) While I based my prediction eight years ago on my experience in the industry, I think that no special knowledge is needed to guess accurately how this will turn out.

Newspapers have been consolidated all over the country in the last couple of decades. Never, to my knowledge, has anything at any of them improved.

But this is the worst example I’ve seen, and if I hadn’t grown up caring about local newspapers, I’d find it hilarious. But I was raised to think of the local paper as important, worth risking your life over, so to me it’s tragic.