What joke about this picture could be funnier than the picture itself? (Credit: Dennis E. Powell)

Is the World Too Ridiculous to be Funny?

By Dennis E. Powell | Posted at 11:30 PM
The news yesterday was sadder than sad: P.J. O’Rourke has died.


He was 74 but didn’t look it. He led many of us on a humorous journey over the river and through the woods, from silly childhood to appreciation of being an adult.

Many of us first got to know him a half century ago, when he edited the sometimes perceptive, sometimes over-the-top, always irreverent National Lampoon. The writers there strode broadly across American humor for a generation: O’Rourke, Douglas Kenney, Henry Beard, Michael O’Donoghue, Ann Beatts, Tony Hendra, Brian McConnachie, Al Jean, and John Hughes among others, all of them beloved and most of them now dead. And when we outgrew jokes about doing drugs and getting into trouble, when Cheech Wizard and the late Vaughn Bode no longer drew our appreciation, there was Patrick Jake O’Rourke, leading us to the next horizon of hilarity.

My generation has produced some truly great humorists. Some of them it has been my great good fortune to know a little; I’m thinking here the likes of Dave Barry and Gene Weingarten, both of whom I was able once to think of colleagues, and of course P.J. O’Rourke.

It was easy to assume that anyone at National Lampoon would be a wild-eyed liberal, and some though by no means all of them were, but not P.J. O’Rourke. He was a conservative-libertarian because that’s the natural landing point of people to whom good sense matters. Everything else simply takes itself too seriously and is pretty well devoid of humor.

One of the first things a thinking person learned was that when you saw a P.J. O’Rourke byline, you stopped what you were doing and read the article. Some of the pieces were great, while others were merely good. None was ever a waste of time.

Within their overall brilliance were nestled true gems:

“Giving money and power to government is like giving whiskey and car keys to teenage boys.”

“There is only one basic human right, the right to do as you damn well please. And with it comes the only basic human duty, the duty to take the consequences.”

“Death is so important that God visited death upon his own son, thereby helping us learn right from wrong well enough that we may escape death forever and live eternally in God’s grace.” That last one — there are thousands of them — I hadn’t seen until just now, and I was surprised and gratified to find it. Good for him.

One of my favorites, from A Parliament of Whores: “I have only one firm belief about the American political system, and that is this: God is a Republican and Santa Claus is a Democrat.”

A certain portion of the world, the best portion, I think, was anguished at the news of O’Rourke’s death. He didn’t have to live forever, I suspect most of us thought, just longer than we did. I saw lots of speculation, most of it around the question: Was there anyone, anyone at all, who knew and didn’t like P.J. O’Rourke? If there was, that person remains undiscovered.

I cannot know but am free to imagine that O’Rourke would find satirical irony in his dying at a time when the world has become so ridiculous that it’s increasingly difficult to make fun of, when the punch lines are reported as news.

For example: there’s a country north of here called “Canada.” I think most people have relatively warm feelings toward the place. It’s not especially exciting, but there are parts of it as beautiful as anywhere on Earth. The people are known for being warm, friendly, and reasonable.

But the place is run nowadays by a young snot (you see pictures of him sometimes in a graying beard, which may be pasted on) named Justin Trudeau. His inferiority complex is richly deserved, not because Canada is an inferior place but because he was raised to be an inferior person. His father was limp-wristed lefty Pierre Elliott Trudeau, a prime minister of Canada during the period (from the beginning of time through now) when if you paid a dollar to everyone you met who could name the prime minister of Canada your bankroll would remain intact. His mother is notorious New York nightclub slattern Margaret Trudeau. (There is — seriously — a Snopes.com entry denying that little Justin’s real daddy was Fidel Castro. Maggie had quite the reputation.) He’s lived his life as a sort of permanently undergraduate Hunter Biden, or one of the Kennedy relatives who have dabbled in fields as wide-ranging as Congress, anti-vaccination campaigning, and murder. He’s a self-regarding punk.

In the latest in his string of failed attempts to seem relevant, little Justin decided to strike a meaningful blow against Covid-19, by requiring that truck drivers, who sit in isolation in their trucks all day every day and 90 percent of whom are vaccinated anyway, undergo mandatory vaccination or they wouldn’t be allowed to cross from province to province or country to country (the only country in question being the United States). Except the dim little fellow waited until mid-January to enact his rule! It’s as if he missed the first two years of the pandemic. Apparently annoyed at being ignored (the best you can hope for when you’re Justin Trudeau), he stamped his little Canadian schoolboy foot and created the silly regulation. “Wait a minute there, buddy,” said the truck drivers. “You’re a day late and loonie short there, eh?” They drove their trucks to Ottawa (the capitol of Canada, in case you didn’t know or even if you did) and parked them outside the Parliament building. They honked their horns and had a party for themselves. Tiny Trudeau was terrified. (One suspects that as a child he was back-handed to the ground and the other, younger children stood around and laughed as he groveled and cried.) He asked himself, “what would my hero Joe Biden do?” 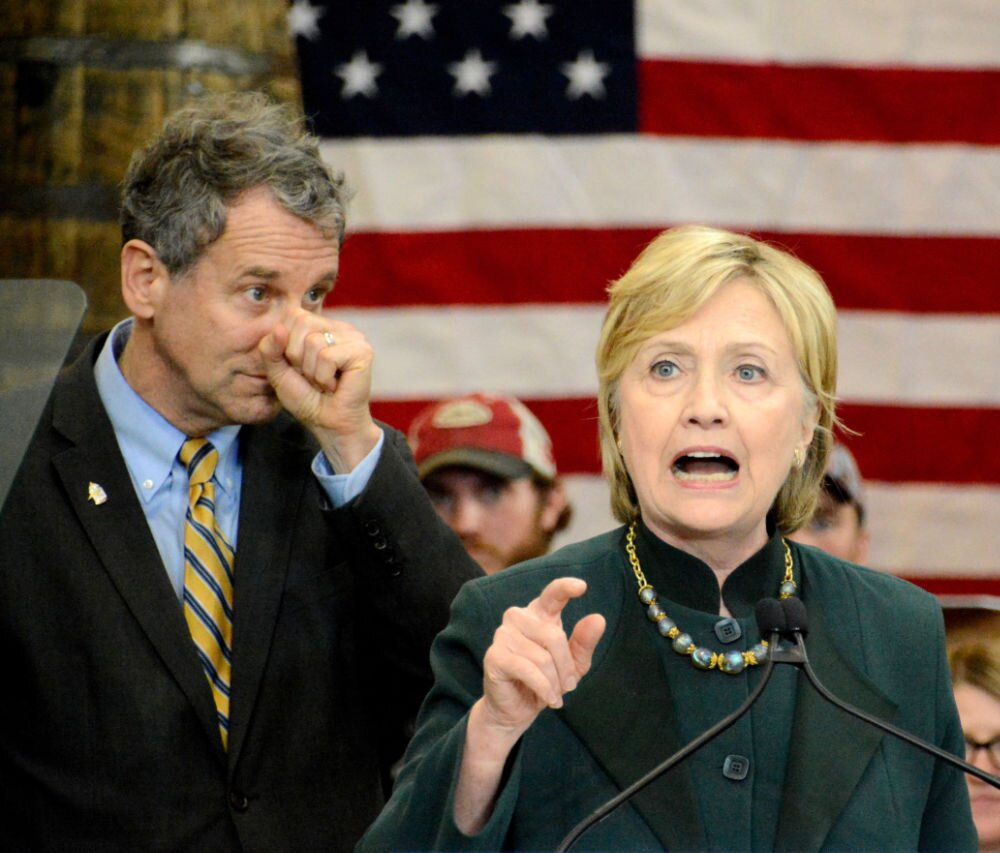 So Justin Trudeau declared a national emergency. He called the truckers everything except sons of Castro. He said he’d take away their trucks, insurance, bank accounts. The truckers and the rest of Canada have taken it remarkably well, like a parent waiting for the squalling, red-faced tot to cry himself to sleep.

Said one of the truckers this morning, in an interview about the boy’s action,” I can’t say I’m overly excited.” Justin Trudeau being a punk because he can is, first and foremost, high political comedy. It needs no help being funny. Even the magnificent P. J. O’Rourke would be hard-pressed to improve on it.

As this unfolded, here in the unfrozen south for the first time ever it actually became possible to feel sorry for Donald Trump. Remember all those times when Trump complained he was being spied upon by the evil Hillary Clinton and her officious factotums? Turns out it’s true. As more and more documents emerge, it is increasingly evident that Mrs. Clinton, who runs for and sometimes even holds public office alongside her career as a shakedown artist, hired lawyers — humans weren’t available, apparently — to plant information on Trump computers both outside and inside the White House, then tip off friendly “law” “enforcement” officials and “reporters” so as to leak that the information was being investigated.

It’s all but impossible to make a joke about Bill’s pet harridan that goes beyond what’s demonstrably true. And it just keeps growing.

When this news broke last Friday, I figured that people would realize that yes, she and her toadies are and always have been the crooks that anyone with working brain cells has always known them to be. But then I remembered a picture I made in 2016, when Hillary appeared locally (and was damn near run out of town by coal miners). This picture was made in the local diner and next to her sat an adorer in full worship. (No, it wasn’t Justin Trudeau.) 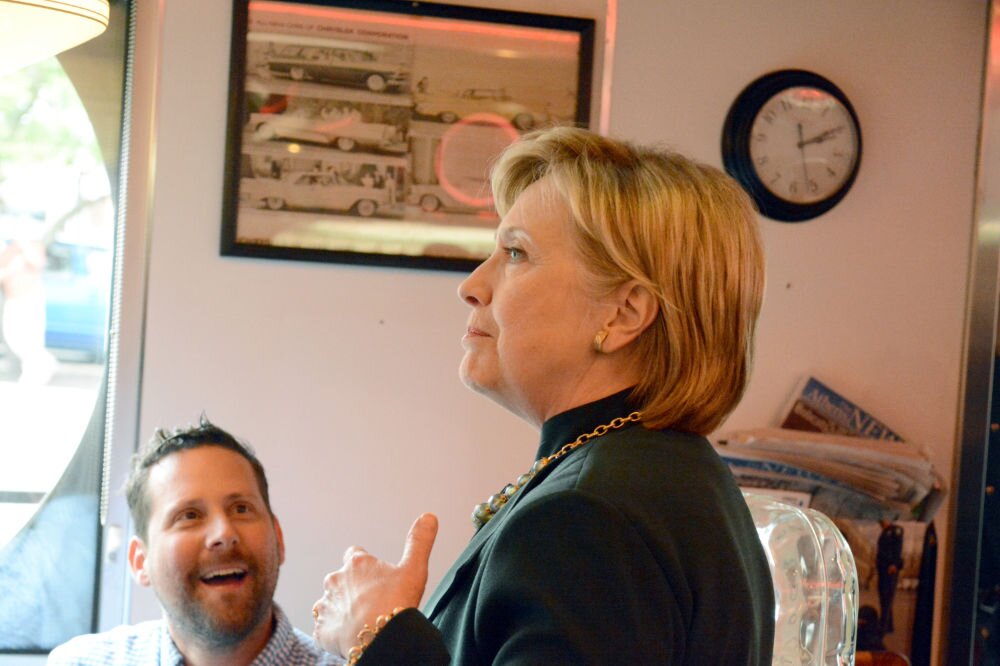 This adoring admirer tells us all we need to know, I think, about Clinton supporters. (Credit: Dennis E. Powell)

As I looked at the picture last night, I was taken at how difficult it would be to make a joke more ridiculous than the one this Clinton enthusiast made about himself by simply radiating his affection toward a singularly un-admirable specimen.

As much as he will be missed, it could be that P.J. O’Rourke got while the getting was good. In oh so many ways the world has become too stupid to be funny.