Here's what a positive Covid-19 test looks like. I was not happy to see it.

This is unrelenting. It’s been going on for two weeks that seem like two months, and there’s no end in sight. And while I’m a little spacey and shell shocked, I’m hoping I can tell the story.

Two weeks ago as I was finishing up the column that appeared in this space, I realized that writing was taking a lot more effort than usual. It was as if I were typing not with my fingers but the tip of a fishing rod. Once I got done I sat back and realized that things didn’t feel right.

The immediate thing to do was drop a note to mysisterthedoctor. I listed the symptoms and my body’s response to them. The one-word reply came quickly: “Covid.”

She overnighted me a quick test which confirmed the diagnosis. Now what?

People who have or have had Covid-19 report a baffling range of symptoms, pains, and phenomena — the thing really is a mystery. People I know who have had it are consistent in their description. Some were vaccinated, and some were not; this variable seems to have had little effect on their likelihood of contracting the disease, its severity, or its duration. Some in both groups got very sick, while others endured it more readily. One unvaccinated acquaintance spent four days in the hospital, while a vaccinated friend was in the hospital for nine days. (Have you noticed, by the way, that Dr. Anthony Fauci seems to have dropped off the face of the earth, or at least the television screen? Wonder what that’s about.)

I’m sorry to have benefited from it, but my sister herself was just coming off a bout of Covid of several weeks’ duration, so she had immediate observations and predictions that were comforting to me.

Two years ago, when this all began, she sent me a pulse oximeter. This is a device you clip to a fingertip and through some strange magic it tells you several things, the most important of which is the oxygen saturation level in your blood. I now put it on and fired it up and learned that I was running between 94 and 96 percent. This isn’t the best possible, but it means there was nothing much to worry about in that regard. In very bad cases, the level can drop much lower, so the device is a way to determine whether urgent treatment is needed. (Not that there is much treatment available. Joe “Crackpipe” Biden put all the eggs in the vaccine basket, for good or mostly ill, and his government seems to have done all it can to suppress effective therapeutic options for those who have the disease.) 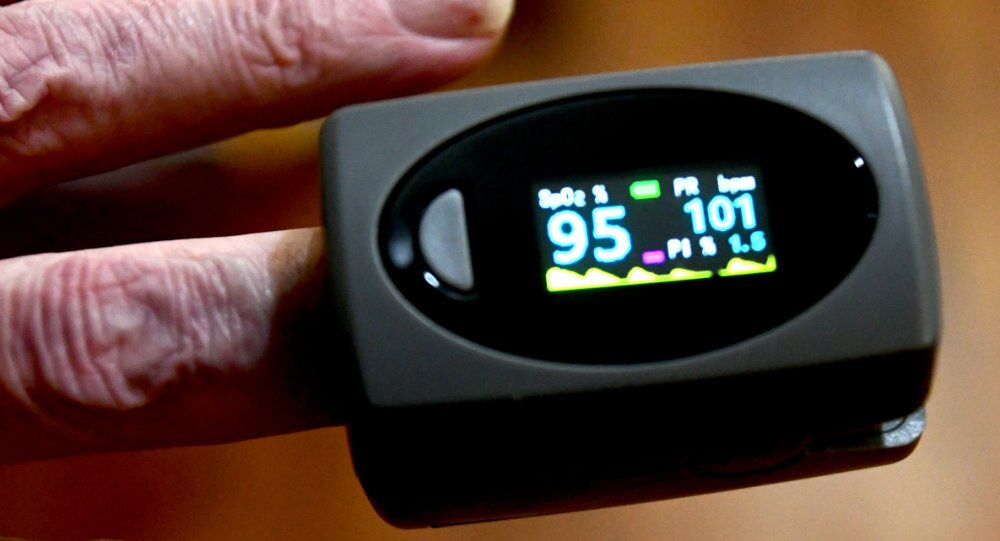 My pulse oximeter shows my blood is 95 percent saturated, which is good.

At first it felt mostly like the flu. I do not mean a bad cold but the genuine, it-can-kill-you-too flu. Food tasted awful, as has been reported of Covid but is also true of the flu. It didn’t matter because I wasn’t much hungry. Sleep was troubled and beset by terrible night sweats. Drinking lots of water was important, and I was perfectly happy to do this. I’d take my temperature: if I had a fever I’d take ibuprofen. If I didn’t, I’d take an aspirin.

I got very weak. Bear in mind, a few days before this I’d been doing daily pushups, situps, leg lifts, and the like. Now I discovered that I lacked the strength to shake down the mercury in my fever thermometer. Added to this was an almost total loss of balance and particularly uncomfortable spatial disorientation leading to nausea. I could get seasick sitting on the couch.

Part of the story would read like a comedy of errors were it not so serious. The weather was getting very cold, in the neighborhood of zero degrees Fahrenheit. It was just now that the propane tank announced that it was down to, well, fumes. I placed an urgent call to the gas company which assured me, untruthfully, that they’d be right over. (In fact, it took them five days.) The lack of heat, hot water, and the ability to cook made a bad situation worse. I have space heaters and a couple other tricks, which is why my frozen body won’t be found come the spring thaw. There can be disadvantages to living by oneself deep in the woods.

Coffee tasted so bad that I concluded the coffee machine needed a comprehensive cleaning, and I just wasn’t up to that. Fortunately, I keep a good supply of jasmine-scented green tea, so I more than made do with that. More alarming was my mouth drying out. My tongue felt like that of a cat. And water didn’t seem to improve things. I had nasal congestion to the point of claustrophobia.

I had a cough, which was mostly productive. There are people who report dry, hacking, agonizing coughs, but I suffered this for only a couple hours on one day.

Three days in, I realized that I had to eat something. I tried half a banana. The flavor was so cloying that — I’m serious — I wonder if I’ll ever be able to eat bananas again. Anything sweet became way too sweet. Even the traditional comfort food, graham crackers, were inedible. Compounding all this was the arrival of waves of nausea. I had a “6 Cracker Assortment” from Aldi, and those happily bland items were kind of satisfying.

(Many people report terrible headaches; I was spared those. So far.)

On the fourth day I actually had a slight, very specific appetite: I wanted some minestrone soup. So, despite the observation that Covid renders one almost as if drunk, I launched a mission to town. Aldi had no minestrone nor anything else I wanted, so I headed to Kroger.

I have grown to hate and despise Kroger, because Kroger has made it clear that it hates and despises me. It manifests this by every so often rearranging everything in the store for absolutely no reason, which it had just now done. On this day the situation was worsened by the prediction of a huge snow-and-ice storm. The result was a store crammed full of hurried, angry, confused people. I was able to get digital thermometers at $3/pop; I got two (neither of which worked). I never did find any minestrone.

So I got home pretty much empty handed, in time for the snow and ice. No heat. No hot water — oh, for a shower! No ability to cook on the stove.

And then the power went out.

I keep the generator pre-positioned, so it’s usually pretty easy to plug it in, fire it up, flip the switches, and have domestic electricity. But usually it isn’t already difficult just to walk, never mind the layer of ice over everything including the generator cover. A kind and merciful God watched over me such that I had the thing going before I succumbed to despair. I reported the blackout. And I marveled at one’s ability even in very bad times to do what must be done, even when he’s too weak to shake a thermometer.

Meanwhile, the symptoms kept changing subtly. I detected what seemed to be a bit of neuropathy, manifested in occasionally involuntary movements as well as extremely cold hands and feet. Mostly the change was in matters of degree. The most onerous was what I think of as the snow plow effect. If the blade on your snow plow is at an angle, it pushes the snow off to the side so you can continue moving forward. Covid has no angle setting. You can push and push, but it all just keeps on piling up in front of you, heavier and heavier, until your wheels are spinning and you’re just sitting there, forward progress not up to you.

Somewhere in your mind is the sense that it will get better, one day it will be over. But then you realize that you’ve been in this for only a few days and the general reports are that it’s at least three weeks before you begin to feel better at all.

A few minor miracles appeared; one of my favorites was V8 juice. It actually made me feel a little better, in part because V8 juice imparts the sense that it is good for you. As a rule it’s a good sign when one’s appetite returns. That which one craves is likely that which will end up tasting good. (I didn’t crave that awful banana!) Late last week I had a powerful hankering for a Wendy’s bacon cheeseburger, and over the weekend I drove to town and purchased two of them. I do not remember ever enjoying a meal more. But having eaten little for 10 days my stomach had shrunk, so I was out of space before I was out of desire to eat. My meal was a good thing, I guess, though it had no overarching positive effect.

Until this illness my daily routine included a couple scoops of protein powder — one whey, one plant-based — in 12 ounces of soy milk, with which I wash down my daily vitamins. At the beginning of Covid I couldn’t stand any of it, but by the start of this week the ability to consume this part of a complete breakfast (as they say in the commercials) had returned. Though I continued to feel kinda punky and possessed the thought processes of a groundhog, this was a good sign, I thought.

I forced myself to clean the coffee machine, and the coffee still tasted awful, so that wasn’t the problem after all. Shaving remained too high a hill to climb.

Something that wasn’t and isn’t a good sign is the sleep disruption. When I can sleep at all it’s fitful and troubled, tormented by those nightmares that tell you you’re not sleeping but the next day you realize were dreams. Around here lately the phenomenon is made worse by the (real) arrival of a pack of coyotes who scrap and howl outside my house. The result of it all is a growing dread of sleep. And it remains impossible to get properly comfortable at all.

I’m two weeks into it now. Things like watching television aren’t in the cards, because the concentration necessary doesn’t exist but a kind of confused dread does. I find that I’ve come to hate things I loved because they’re now associated with the illness. Whether this will pass remains to be seen, but at present it seems unlikely.

As I’ve checked with those who preceded me in the illness, one thing is consistent: I’m nowhere near done with this thing. If I’m lucky, I’m told, in a week I’ll begin to feel a little better, and in two weeks I might just be over it.

Meaning that after all of this, I’m only halfway done.

At least, after this I’ll possess a genuine immunity, not some phonied up government-supplied immunity that doesn’t always seem to protect much of anybody from much of anything so why not get yet another shot.