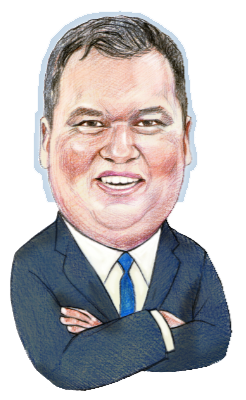 Eduardo Sanchez is a contributing editor and senior international correspondent to Open for Business. Eduardo’s background includes studies in theology and law; he also has a great appreciation for Renaissance sacred music. He resides with his wife, Gloria, in Asunción, Paraguay (South America).

Back in mid 2019, I was on the market for a new laptop. My old laptop was plagued by issues that, while farily minor, where a deal breaker for me. Thus, I got a shiny new Dell laptop which seemed to fit the bill just right. And it did… mostly. Enter 2020 and the pandemic. Most work I had to do was from home, and that meant using my laptop. Thus, that poor Dell laptop’s keyboard got quite a beating. Again, I wrote thousands and thousands of words as part of my daily job. The laptop soldiered on, but at some moment the keyboard began to act up. What could I do? I considered my options.

Stopping Jerks from Abusing the Church

By Eduardo Sánchez | Feb 04, 2010 at 2:09 AM
In my last piece, I examined how there is a species of creature known as the jerk, someone inclined to grab power at organizations with no regard to the cost meted out to other people. Churches, unfortunately, are often the targets of these people. In this essay, I want to consider historical approaches to balancing power in the church and how they may grant insight into protecting churches from jerks.

When Jerks Abuse an Organization

By Eduardo Sánchez | Jan 15, 2010 at 8:58 PM
When I read the article by our Editor-in-Chief, "The Hidden Danger of Peacemakers," the other day, the dreadful actions that were told in the article sounded eerily familiar to me. I am not acquainted with the Peacemakers (they are not active, or so it seems, in my home country of Paraguay); but the actions depicted reflect the almost uniform sorts of behavior that appear when jerks -- that kind of person that has no trouble abusing others as long as he or she can seek their stated goal -- take control of an organization.

By Eduardo Sánchez | Dec 10, 2004 at 11:53 PM
I would like to thank our kind readers for the encouragement and the appreciation. This time, we turn to issues more related to hardware. First we will see how to enable removable drives in our Slack installation, with especial attention to floppies; and then we will examine how to setup new hardware, using our scanner as an example, since its setup was tricky.

By Eduardo Sánchez | Nov 23, 2004 at 11:30 PM
Multimedia has now become an essential part of every computer, including those within the enterprise. While aRts was, for along time, hailed as the answer for multimedia within KDE, it fell out of favor as it became obvious that it was hopelessly inefficient. Associate Editor Eduardo SÃ¡nchez sits down with Scott Wheeler of the KDE Project to find out where the KDE multimedia department is headed in general, and concerning a replacement for aRts, more specifically.

By Eduardo Sánchez | Sep 16, 2004 at 10:00 PM
In the third installment of the Stealth Desktop series, Eduardo SÃ¡nchez builds upon the previous steps of Part I and Part II. Continuing where those parts left off, he introduces the subjects of user, font and printer management in Slackware.

I think that Tim Butler’s article, “Why GNOME’s Got it Right,” raises some serious points worthy of consideration by every KDE user and advocate. However, I would like to add the following points that should also be considered.

By Eduardo Sánchez | Jul 15, 2004 at 10:41 PM
I hope that Part I of the Stealth Desktop series was a good start for our series about using Slackware as a desktop. I would like to thank our kind readers for the feedback, encouragement and suggestions.

The Stealth Desktop Part I: Finding a New Distro

By Eduardo Sánchez | Jul 01, 2004 at 9:55 PM
The issue of GNU/Linux as a desktop operating system is hot these days. You can hear here and there about someone switching their proprietary desktops, or considering doing such a thing, to GNU/Linux. Most of these stories refer to some desktop-oriented or mainstream distribution, such as Mandrake, Red Hat/Fedora, or SUSE. However, there is one distribution you would seldom hear about and yet, it is uniquely qualified for heavy-duty desktop usage. I would like to show you how you could use this GNU/Linux distribution for desktop fun and profit.

Update [July 9, 2004]: thanks for all the feedback. Some minor corrections added. --Eduardo

By Eduardo Sánchez | Jun 15, 2004 at 8:52 PM
As many of our readers already know, I use GNU/Linux as my sole desktop operating system on a daily basis. I use it not only at home, but also at work, in a very demanding and performance-driven enviroment that sometimes moves at breakneck speed. And as usual, GNU/Linux delivers. The old, tired FUD sayings such as "Linux is not ready for everyday desktop use," "Linux is OK for servers, but [Windows/Mac OS X] are for desktops", and "Mac OS X is the only UNIX desktop worthy of consideration" are not operational here. For my favorite operating system, desktop usage is business as usual, and I'm glad it is.