The Perverse Glory of ‘Glee’

This television show has already been commented on roundly—praised, lambasted, lamented—so perhaps I am undercutting our goal here at OFB. But in so many ways, it is a microcosm of America today, in both its tragedy and possibility, and as such, it cannot be ignored.

The show revolves around a high school glee club in Ohio chalk-full of the school outcasts — racial minorities, nerds, and homosexuals — somehow thrown together with an influx of popular kids (the quarterback, the head cheerleader, the “bad boy”) in a once-defunct glee club that nonetheless had great success in the recent past when its sponsor, Will Schuester (Matthew Morrison) was a student.

Schuester, wanting the club to regain its former glory, and to affirm this group of misfits, (whatever his flaws, he is model teacher) aims to lift up the kids of McKinley High through song. He is opposed by his controlling wife, Terri (Jessalyn Gilsig) and the coach of the Cheerios cheer squad, Sue Sylvester (Jane Lynch). Will and Sue are the heart of the show; his earnestness juxtaposed with her seeming evil makes the show go as a comedy. This character of Sue is very much like John C. McGinley’s Perry Cox of “Scrubs”—comically hostile until the realities of human life force that humanity out of the character. And in this, the writers of ‘Glee’ do an even better job of hiding Sue’s humanity. 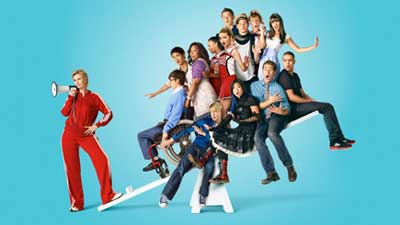 The singing is excellent, and standing out in this regard are Rachel Berry (Lea Michelle) and Santana Lopez (Naya Rivera). One hears a good mix of current hits, pop hits from anytime in the last 50 years, and favorites from musicals. Having hit the Billboard Hot 100 roughly 110 times in the approximate 2 years since the show began, I think it fair to say they’re doing something right.

In one sense, the show earns the scorn and concern of Christians and other religious traditionalists; there likely is not one of the Ten Commandments left unbroken by the characters. Sex and sexual expression does drive much of the storyline, and though the actors are (mostly) twentysomethings, their characters are not. The show is unabashed in its promotion of homosexuality and homosexual activism, and ironically, it is Jane Lynch’s character who often serves to satirize the pretentious flamboyance of the club’s openly gay member, Kurt Hummel (Chris Colfer), since Lynch herself is lesbian.

Religion often bends to these sensibilities in the ‘Glee’ universe, when it is not being mocked outright. It is worth noting that Kathy Griffin’s recent turn on the show as an obvious facsimile of a Tea Party-inspired Sarah Palin (and unfunny one, at that) hints at part of the national conversation that wants to go on openly but doesn’t. The principal of the school, Figgins, (Iqbal Theba) is full of evangelical cultural affectations that mean nothing. In short, there is plenty to hate, lament, and huddle up about.

But just like an interesting person you meet that you don’t like everything about, ‘Glee’ is the same. There’s something about it in the bad places, something you see and understand about yourself that makes you unable to reject it. There’s plenty of charm and goodness, too. Just like a bad person who gets an attack of conscience, ‘Glee’ gets suddenly real and it asks you to come along.

It may be as haphazard about morality as any of us (or, at least, any troubled friend you have). But just like any friend, you nod your agreement when it’s right, even if it doesn’t happen that often.

A few things I know are that I love music. I love to laugh. I love to share serious things. I like to get away from it all. I like to come back. I like difference. I like sharing some things even so by way of humanity.

And so, I love this show. I have no fewer than 12 episodes from this second season recently concluded on my home DVR. I’ve not seen a TV show this re-watchable since Law & Order. I doubt it stays on 20 years, but it’s not forgettable. You can easily forgive the liberal sacred cows, the immorality and the oddity. It is worth it. I promise: spend your fall Tuesdays at 8 ET with ‘Glee’ on Fox, and you’ll remember why you love TV.

Jason Kettinger is a contributing editor and senior sports writer for Open for Business.

Also Filed Under: Home: Culture: The Perverse Glory of ‘Glee’

Re: The Perverse Glory of ‘Glee’

I couldn’t agree more! Glee is a show that I just love to watch, though I regard it as more of a ‘guilty pleasure’!

Re: The Perverse Glory of ‘Glee’

Great article. I totally agree. And heck yeah, Naya Rivera and Lea Michele are the best singers on the show! Love this show and all its ridiculous-ness. Can’t wait for the 3rd season this Fall!