The View from Mudsock Heights: Our Response to Local Disaster Taught Us a Lot -- About Ourselves

The sky wasn’t just dark, it was … weird. Meanwhile, the weather radio was going crazy, with alerts interrupting other alerts.

The radar looked strange as well. Normally there is a bright red line, its location, direction, and speed easily discerned. This time, it was blotchy, with big blobs of red surrounded by nothing unusual, not even a sign of rain.

At Athens High School, sporting teams were on the playing field. People were going about their business. Late summer storms had been predicted, perhaps severe ones, but there seemed no cause for particular alarm.

Then, long about suppertime, everything changed.

No one who experienced it is likely soon to forget the events of six months ago this Wednesday here in southeastern Ohio. That’s when a tornado hit The Plains and other locations in my county. (First they said it was a tornado, then that it was something related to a microburst, then a tornado again; I don’t know what the current thinking is, but the videos sure looked like a tornado to me.)

I went to The Plains first thing the next morning. It was not a scene of utter devastation. It did not look like “a war zone,” whatever that is. That was part of what made it all so spooky. Here, a house was pretty much flattened, while next to it was one that needed only a little roof repair and a coat of paint. Some trees were uprooted, while others sprouted jagged stumps where limbs had been. 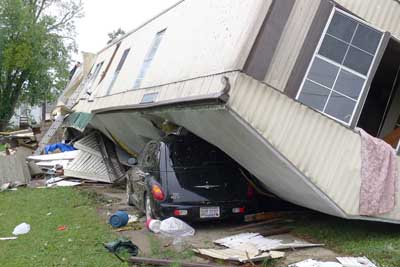 People were walking around, looking, or already busy cleaning up. No one was smiling, but no one I saw had that blank stare of shock that often follows disasters. People around here tend to be pretty tough, in the good sense.

I happened to return to The Plains the other day — the heel had come off one of my favorite work boots, so I needed to see the shoemaker — and I drove around, looking at the scene six months later. It was both pleasing and disheartening.

The morning after the storm I’d spoken with Doug and Trina Witham. Their 110-year-old house had been well and truly shaken. The wind, or debris, had broken out windows, which disordered the inside of the house; limbs and a neighbor’s airborne garage had made short work of their carport and much of the house’s exterior. The wind had blown the very paint off the front of the house. Doug Witham was not sure that the building could be repaired.

Driving past now, I saw that indeed it could be and has been repaired. New siding and a new carport made it look as if nothing had ever happened.

A lot of other houses, too, have gotten fixed. It was a cold winter, making the work both difficult and urgent.

Lindsey Johnson’s little store has had its windows replaced and is all cleaned up and open for business. The wrecked and tangled power lines have all been restrung, the broken poles replaced.

Still, it was clear that something had happened here. Trees look in many places like broccoli after my baby sister had eaten — she would cut off the tops and put the trunks back in the bowl. The jagged ends in most places have been cut away, leaving a nice, flat, tended appearance. The chain link fence at Athens High School is still battered and bent, but the debris there is mostly cleared away.

The saddest part, maybe, is what isn’t in The Plains anymore. There are lots of places where only a concrete slab reminds passersby that once a building was here. The iconic image of the storm was the doublewide that had rolled over, landing atop the PT Cruiser parked outside. Now the trailer and the car are both gone, replaced by nothing.

Yet The Plains is well along in recovering from the event of six months ago. So is the building at the end of East State Street that was wrecked even as the buildings near it were not. I do not know about the small communities, not attached to Athens, that were badly hit, but I bet in most cases the residents got to work rebuilding. As I say, people around here are tough, and rural people are the toughest.

Community groups, some that already existed and some that were ad hoc, collected food and money to help the victims. This is not the wealthiest part of the country, yet people pitched in. People around here are neighborly, too.

Residents themselves went to work, not waiting for someone to come and fix things for them.

As I drove through The Plains that morning last fall and again a few days ago, it seemed to me that the aftermath of the storm would tell just about anyone all that one needs to know about this area and its people.

It is true that the disaster here six months ago was minuscule compared to some — many — in the world today, in Japan especially but elsewhere as well. But it was very big to those involved, and they rose to the occasion.

And it made me very proud to live here.

Tags: the view from mudsock heights
Also Filed Under: Home: Culture: The View from Mudsock Heights: Our Response to Local Disaster Taught Us a Lot -- About Ourselves