The Time I Fired Santa Claus

He was a reporter at the old Fort Lauderdale News the same time I was. Though while most us thought of ourselves as young reporters on our way up, George already had enjoyed (mostly) a rich and colorful career. He’d been a police reporter at the New York Daily Mirror alongside the likes of Walter Winchell and his circle had included Damon Runyon. When The Mirror closed down, George moved to Phoenix, where he was a reporter, of course, and where he met his wife, Ruthie. After a while, Fort Lauderdale became his home.

On Thursday afternoons he would hold court at Gaffer’s Pub on Route 1 in Fort Lauderdale, surrounded by the few young reporters to whom reporting was not a job but a calling. There, he would tell us those stories. The one appropriate to this time of year was not the best of them, but it was pretty good. I’ll pass it along now.

Phoenix 50 years ago wasn’t yet the sprawling metropolis it is today, but it hoped to be. As is true in warm climates, the search was always on to establish or extend some kind of local Christmas tradition, some way to impart the idea that this was a good place to be for the holiday. And so it was decided by the developers of a shopping center that on the day after Thanksgiving Santa Claus would parachute in to greet a happy throng of enthusiastic children. The event was heavily promoted and on the day itself a huge crowd had assembled.

There was a problem. The exact nature of it wasn’t entirely clear, but Santa chickened out or got fortified through liquid refreshment or for some other reason would not be jumping out of an airplane that day. No problem, said the organizers. They’d parachute a dummy dressed as Santa Claus into a nearby stand of trees and then Santachicken or Santalush or Santawhatever would walk out of the grove of trees, all ho-ho-ho and happy. Yeah, that’s what we’ll do.

I have no idea how the drop was rigged, but the result was that Santadummy came plummeting to earth without the mitigation of a parachute. He landed with a discernible whack, and his bearded head came rolling in the general direction of the now-horrified assembly of festive children. It was the good luck of the shopping center developers that they conducted their disaster before plaintiffs’ lawyers were as imaginative as they have since become.

Though it’s not as dramatic and, okay, hilarious as the tale told by George McEvoy, I have my own sad tale of Santa Clausical woe, which I’ll now relate.

It came to pass that in my last year in my home town I ended up managing the local pop-up franchise of the Santa Claus Photo Studios at the big local shopping mall. It was a good though demanding job. It required me to travel to Chicago to undergo several days’ training, mostly memorization of the lines that it was thought would maximize the sale of pictures to the fawning parents of the squirming tots on Santa’s lap. The idea was that we’d act as if they were required to buy some pictures — they weren’t — by encouraging them to buy even more. (I thought I remembered the exact line, but now realize that time has conflated it in my memory with an old television ad involving prunes: “Are two enough? Are six too many?”) 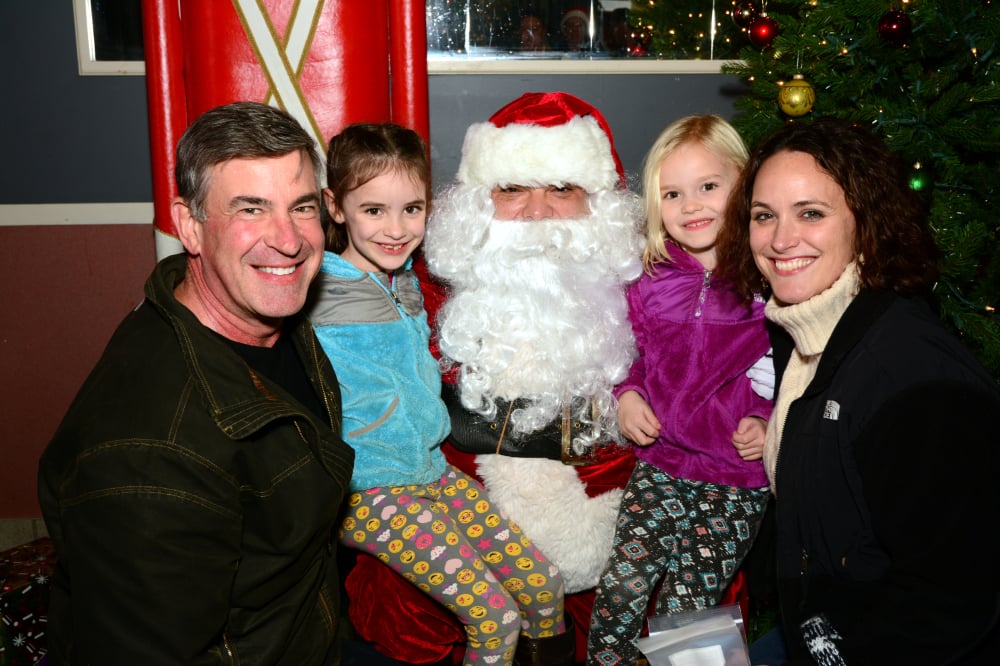 In small towns and cities, even the mayor and his family show up to pose with Santa. (Credit: Dennis E. Powell)

It’s immodest of me to say so, but I was a pretty good Santa Claus Photo Studio manager. As assistants I hired some friends, who were talented and pretty actresses from a local college’s theater department. They were unsurpassed at getting smiles from the kids. The actual hiring of Santa was done by the shopping mall. They made a good choice, in my estimation. (As it was understood then, a shopping center was a series of stores that had separate outdoor entrances, all in one building, while a shopping mall had store entrances from a common enclosed space. I have no idea whether that distinction survives. Nor does it much matter, I suppose.)

Our Santa was an Elk, and on the night of the Elks Christmas party there was a substitute. After many years’ reflection I have concluded that he did not take the job seriously. There were clues available to me at the time, had I only paid attention.

As was alleged in Arizona’s decapitation incident, substitute Santa arrived well protected by the laughing waters against chill should the mall heating system fail. He was not good with the children, so the pictures from that night looked as if the tinies had been told they would get nothing. It was a bad situation. When he suddenly stood up, dropping a child to the concrete floor, so he could stride to the fence of the Santa pen and shout to friends far down the mall, pulling down his beard so they could see who he was, I kind of involuntarily rolled my eyes. Substitute Santa saw this.

“What’s the matter with you, you young [vulgarism asserting that my parents had been unmarried]?” he shouted. The children in line looked shocked and some were about to cry. I turned to them and said, “Santa is feeling out of sorts and must go rest now. He hopes you can come back later.” Then I turned to Santa and said we were done for the evening. He responded with several sentences that I had not been brought up to expect Santa Claus to say. 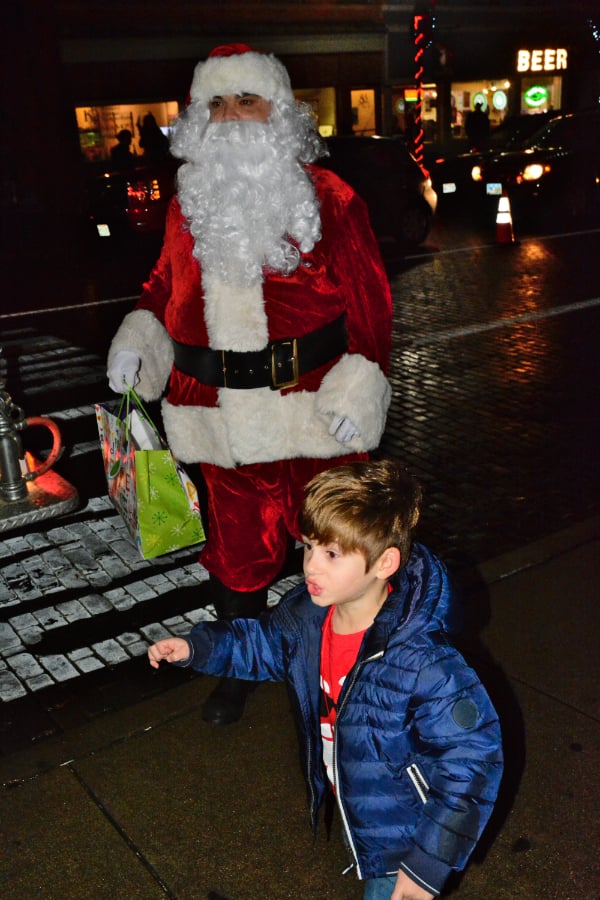 Jack, who had become something like the city’s official greeter, rushes ahead with the news that Santa — a good Santa — has arrived. (Credit: Dennis E. Powell)

As calmly and quietly as I could, I said, “Get out. Go home. You are a very bad Santa and a very bad man.” This did not calm him — I do not know why I expected that it would. He strode away, shouting unpleasant things and twice during his march down the long central mall corridor turned to shake his fist and announce that he would be waiting for me in the parking lot.

It is my pleasure to report that he was not waiting for me in the parking lot, because there’s no way such a dispute could have turned out well. “Photographer beaten up by Santa Claus” is a headline that would have gotten national, maybe international coverage. Likewise “Photographer beats up Santa Claus.” (Had it been today, I could have gone on tour, entering the ring during holiday seasons to take on, oh, I don’t know, the Easter bunny? But we were more dignified back then.)

Actually firing Santa Claus has lingering effects, maybe as great as those carried by the little children who saw what they thought was the head of Santa rolling toward them that sunny Arizona morning.

They were not assuaged until many years later, when my work taking pictures for the newspaper here included making the Santa pictures. The arrangement was not physically much different from that in the shopping mall long ago: Santa and a nicely decorated set, a line of kids with their doting parents, and mass confusion. The set was in the lobby of a retail building across the street from the newspaper office. The whole event lasted two hours, one night per year.

I’d make pictures of 50 or 100 kids, then replace the SD card in my camera so that a runner could go across the street, where the production staff would place each picture into a virtual frame making it seem as if child and Santa were the lead story in the newspaper. These were then printed and rushed across the street to the waiting families. The pictures were free, but you could only get one copy.

In a place like New York City there would surely have been bloodshed as parents clawed and scratched to get their free pictures. But this was southeastern Ohio. Here, the pandemonium was not violent, though it was still pandemonium. It was tense for me, because any equipment failure would have spoiled the fun for everyone. I had backups of everything, but it wouldn’t always be immediately obvious that something had gone wrong — what if, say, an SD card with the priceless images of 100 kids got across the street and turned out to be unreadable? (Fortunately, I had a backup card running all the time in my Nikons, so even this would not have been fatal, though it would have been a mess to sort out.) As it happened, nothing ever went the slightest bit wrong in the several years I was the town’s Santa photographer. And over those years I got to know some of the kids and their parents by name and got to watch them grow from year to year.

I don’t think it’s done anymore. The newspaper moved to the outskirts and continued its involuntary diminution, with COVID-19 providing cover. Chalk it up as another great thing I arrived at the tail end of. Someday it will get sorted out, how the last two years have terribly damaged our small communities.

But it served its happy purpose for me. It let me finally wipe away much of the memory of a commercial Santa who went berserk. Now when I think of Santa Claus, that time I fired him isn’t the first thing that comes to mind.